On 30 June 2021 Council reviewed its representation arrangements for the 2022 and 2025 local authority elections and resolved to continue the existing ward structure of North and South General Wards with four members each and a Mayor elected at large. It is also agreed by way of increasing the size of Council to provide one Maori Ward for the district with one member. Existing community boards for Dannevirke and Eketāhuna each with four elected members and one Council appointed member also continue on the existing basis.

Submissions can be made on any part of the representation arrangements proposal, and close on Tuesday 31 August 2021 at 12 noon.

Population Each Member Will Represent 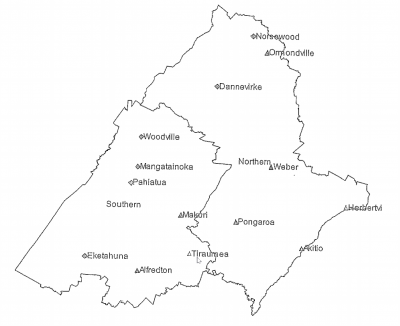 The Council considers these ward arrangements for its representation based on the above are adopted to apply for the following reasons:

Copies of the Council's resolution and maps setting out the areas of the proposed wards and communities may be viewed and obtained from any of its Service Centres.

Any queries regarding the Council's decision should be directed to the Manager - Democracy Services, Richard Taylor.

Persons with an interest in the proposed representation arrangements are invited to make written submissions on the Council's representation proposal. If you make a submission the opportunity is available to present your comments in person to the Council at a meeting held for this purpose, and you should include this request on your submission. The date for hearing submissions is Wednesday 15 September 2021.

Submissions are to be forwarded to the Manager - Democracy Services, Tararua District Council, P O Box 115, Dannevirke, email info@tararuadc.govt.nz and close on Tuesday 31 August at 12 noon.

It is noted (that while not forming part of this representation review) the cost of increasing the size of Council from eight to nine members as district councillors plus the Mayor does not result in additional remuneration costs.

Is this page useful?
Feedback has not been submitted.